As far as film genres go, horror has been with us far longer than most people may think (the first being House of the Devil directed by George Méliès in 1896).

From the very beginning of film, it seems both filmmakers and audiences alike have craved a good spooky story on screen.

What filmmaking techniques does it take to deliver those scares? Keeping audiences on the edge of their seats and glued to the screen is no easy task.

So, what can horror films teach us about filmmaking?

Filmmaking techniques used in crafting those creepy creature features are effective filmmaking tools that all filmmakers need to have a firm grasp on.

The first lesson that horror filmmaking teaches us is that less is more. We've all toiled away on a creative project only to find the resources we believe we would have/need would be available to us, only to find out something changed.

Things often do in the filmmaking process.

We show up on set ready to roll, only to find the talent's availability is much too short, the gear isn't functioning properly, or the scope of the project has shifted.

For as many things that can be planned and fine-tuned before stepping foot on set, there are far more things that can go wrong. The ability to adapt is crucial for all filmmakers to understand.

This is indeed common in crafting horror films. With often smaller budgets than their superhero-movie counterparts, horror films often have less to work with.

However, problems like smaller budgets or your key monster prop not working properly can sometimes lead to a better - and even scarier - final result.

Jaws (1975) famously had problems with Bruce, the mechanical shark. With delays, deadlines, and budgets out of control, director Steven Spielberg was forced to shoot around the monster. 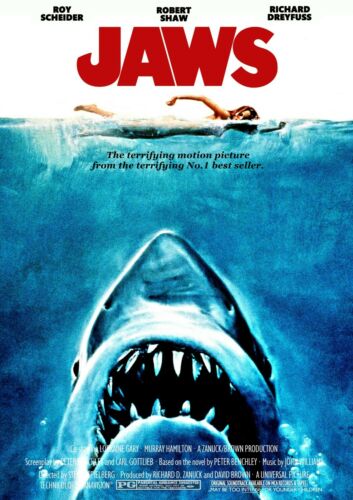 Jaws was a hit despite its titular antagonist not having very much screen time. Not seeing the often hidden monster and giving the audience the perspective of the shark proved very frightening, and far more effective than seeing the shark more often on screen.

Learning to pivot and adjust was vital to the success of the film that is often considered to be the first blockbuster.

Never underestimate how effective your audience's imagination is, and use it as leverage.

SOUND IS HALF YOUR FILM

Sound design is critical. As a cinematographer, I'll be the first to admit that good audio is far more important to your film than the visuals are.

A film is two things: the moving pictures, and the audio that goes with it. But I'm here to tell you that sound is indeed the more important and powerful of the two.

Ever watch a horror movie without sound?

Notice that every jump scare is accompanied by a a loud shriek or clap of thunder?

Without it, the images feel hollow.

BUILD TENSION IN THE EDIT

The structure of horror films are fairly simple. There are three types of scenes that any horror film will cycle through over and over until the credits roll.

These are the least scary scenes during your horror film. We get to know the characters and the plot develops, while giving the audience a breath of fresh air from scares.

The second: the buildup.

The group of teens walking through the dark woods, the haunted house making spooky noises as our heroine sleeps, the terrors lurking below our unsuspecting protagonists.

It's the dread of not knowing when the monster will pop out that drives the fear in the audience. The tension building through these scenes is the key to good horror as it builds to the final scene type.

This final stage is the release of the tension. Your audience has been waiting for this but it must be earned. Without the proper structure and flow of downtime and buildup the scare won't sell.

Yes, a good scriptwriter understands these elements, but it takes a great editor to make it happen. They know scare after scare for the entirety of the film will lose its potency over time, but capturing the audience and taking them on the journey through the buildup of suspense is crucial to delivering a good scare. The editor controls the audience's emotions using various tools and techniques. Cross-cutting is used to control the information the audience is given. The fast-paced cutting used in Pyscho's infamous shower scene creates confusion and chaos, and extending long takes forces your audience to absorb all the unpleasant images.

TAPPING INTO THE ZEITGEIST

Horror movies reflect real world issues. Although movies have often been a form of escapism from the real world, horror films often reflect current fears of the population.

Take a look at The Cabinet of Dr Caligari (1920) and the German Expressionist movement that followed. A film made in Germany in the midst of World War I.

The surreal, dark, bleak and broken environment depicted in this film reflects the prominent Europeans perspective at the time. Each set in this film was hand-painted to create a garish look when combined with lighting, making it one of the most memorable aesthetics ever created. Invasion of the Body Snatchers (1956) is a film reflecting the fears of individuality vs conformity in the face of communism at the height of the Red Scare.

Horror films often are about underlying fears, and fears are different in cultures around the world. In American movies, nuclear weapons or radiation make modern day superheroes. Conversely, in Japan, they make monsters.

Having a keen ear to the current inner fears of the masses is fundamental in offering a good scare. What scared audiences 30 years ago may seem cheesy to audiences today.

Looking back and understanding horror films often comes with an understanding of people's fears and anxieties during the place and time the cinema was created. These tools and techniques, when used correctly, are highly effective in manipulating an audience. However, they aren't exclusive to the horror genre by any means. Techniques used in horror movies are effective tools for any genre of filmmaking.

Sam Raimi, director of the first Spiderman trilogy, began his career with The Evil Dead trilogy. He perfected his skills to guide his audience through tension and tonal shifts, blending the scary and the funny into one. Rewatch the Doc Ock hospital scene, and tell me its not up there with the best horror scenes of all time.

Peter Jackson also got his start directing horror films. He went on to direct one of the greatest cinematic achievements; The Lord of the Rings. The first half of The Return of the King is a masterclass in building tension before the battle of Minas Tirith begins.

All filmmakers need to not only understand these techniques, but many more to craft their stories and captivate their audience.

ALL FILM IS MANIPULATION

Much to my dismay, lightsabers aren't real, I never got the flying car that Back to the Future II promised me, and the xenomorph from Alien is a guy in a costume. There are bits of lies and truths in every film. It's the filmmaker's job to convince you that what you're seeing is real by using every tool in their toolbox. If your audience didn't believe the things on screen, then it wouldn't be scary, or funny or emotional.

Before George Méliès made the first horror movie or the 400+ other films he made during his life he was a magician. He enjoyed tricking his audience into believing that what they saw was real.

Manipulation and magic have always been at the heart of filmmaking. These are just a few of the tools and techniques that make the magic come to life.

Look for out latest blog posts each month for more tips about video blogs, video production, marketing videos, digital marketing, promoting your youtube channel, video animation, and more about out video production services!
Read more about our video production services!
Ready to talk marketing videos? Reach out for a quote or consultation! Let's Talk.
Here are more video blogs you might be interested in:
Women in Video: 3 Journeys in the Film Industry
Speaking Our Language: Filmmaking Lingo You Need to Know
Top Ten Best Practices for Video Production
Check out some of our work!

Speaking Our Language: Filmmaking Lingo You Need to Know

No one forgets their first time on a film set. Loading equipment, running coffee, a wild mix of...

Women in Video: 3 Journeys in the Film Industry

It's no secret that men are represented behind the camera in far greater numbers than women.